I used IDA in remote debug mode during the CTF, but it was somehow buggy and an overall painful experience for me. Writeup using radare2 (even though, what a surprise, their 16 bit remote debugger seems to be currently kind of broken as well).

A single character is read, then a check is performed if the character is in the range of [a-z]. If it is, the char is converted into numbers ranging from 0 to 25. Afterwards the number is multiplied by 2 and serves as the index of a jumptable. E.g. depending on the index a different function is called (jmp ax).

We can find the called functions below, starting at 0000:0662. Luckily they were in oder, e.g. the first jumptable function belongs to the character ‘a’, the second to ‘b’, etc. 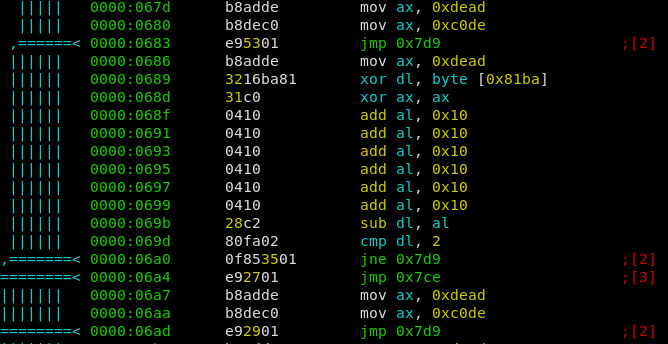 Most of the functions are dummy ones, effectively doing nothing. But some of them contain some checks, and depending on the outcome a different path is choosen. The 0x7d9 path is the one we don’t want to take. 0x7ce Is the way to go because it increments a counter for the amount of ‘correct chars’ (0x81bb), while the other one just increments the ‘total chars’ (0x81ba). If after 9 input bytes both counters are equal, the password is correct.

So the objective is clear, we have to find the correct order of all jumptable functions.

Effectively all jumptable functions are doing the same, however they are more or less “obfuscated”.

So I just deobfuscated all functions and noted the value they compare the input with. E.g. the function for char ‘e’ can be seen at 0000:0686.

I now did this for all functions and wrote a python script to resolve the correct order.

we get sojupwner, wich leads us to the first flag midnight{w0ah_Sh!t_jU5t_g0t_REALmode} and gives us access to stage2. We are now dropped into a custom written “shell” (COMMAND.COM).

First of all, I extracted the COMMAND.COM binary out of the raw image.

We can see that the FAT12 Filesystem starts at offset 63, and the sector size is 512. Therefore we setup the loop device for an offset of 63*512.

Now we can mount and comfortably read the filesystem.

Extract the COMMAND.COM and throw it into IDA or radare2.

The bug was pretty easy to spot as well, even found it bevore even looking at the disassembly. Deleting a character by using backspace had no lower bounds check. With this we could owerwrite jumptable entries for console commands as they were placed directly above the input buffer. By entering an overwritten command we now could now jump arbitrary.

An other thing I used to exploit is, that the shell reads and prints the flag for stage1 in the beginning. And the Filename of Flag1 was right above us as well. Therefore my attack was as follows: